10-year customers get present from Willcom 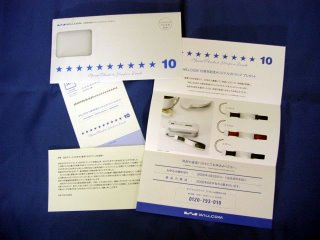 Last summer, PHS operator Willcom celebrated its tenth anniversary. The service was originally launched in July 1995 as DDI Pocket, but it changed its name to Willcom in 2005.

To celebrate this anniversary, Willcom has announced that it is offering a free present to all its customers who signed up to DDI Pocket between July 1995 and March 1996 and were still Willcom customers in March 2006. The present itself is a choice of rather dull phone straps, but, as they say with presents, it’s the thought that counts.

This really says something about the low churn rates of operators in Japan. If any UK operators were to give out presents to their customers of 10 years, I don’t think they’d have many to give away! The longest I’ve stayed with an operator is two years (and that was in Japan!).