It’s still a little while before we have to worry about hayfever here in London but it seems that in Japan things are already gearing up for pollen season, possibly spurred on by the first cherry blossoms of the year. I’ve already posted about hayfever haiku of the day and today Fumakilla, manufacturers of a hayfever remedy, launched a special hayfever-themed advergame for mobiles.

The main feature of the game is not its weird plot (a kind of space invaders where you control a giant hand and must stick your finger up giant noses), but the way it’s delivered to the consumer. Fumakilla have teamed up with Tokyo Radio to beam the advergame over the digital radio spectrum. When the radio station plays a commercial for Fumakilla’s product, the minigame will automatically launch on the handset of consumers listening in on digital radio with their mobiles.

Sending mobile content over digital radio and TV signals is a great way of adding interactivity to traditional broadcast. Also, receiving the data is free to the consumer as nothing is sent over the operator network.

I posted a little while back about Sammy’s soothing and stimulating ringtones for its muPass service. Well, last week they launched a range of therapeuti... for their standard ringtone service, Platinum Tones.

Sammy have carefully selected 10 pieces from the CDs which they are releasing as ringtones. Choices include the third movement of violin sonata no. 24 in C major (the high tones of the violin work wonders on the parasympathetic nerve), first movement of the oboe quartet in F major (the high frequency tones have a soothing effect on the cranial nerves) and the second movement of 35th symphony in D major (the calm arpeggios relieve tension from the body).

For anyone doubting whether a ringtone can really influence your health, I, for one, can vouch for Crazy Frog’s effect on my cranial nerves. 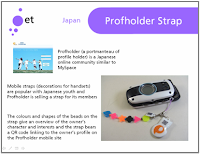 Just thought I'd mention that the February edition of the emerging trends infopack is out. This month's edition contains a few interesting stories that didn't make it up onto w2japan including a GPS chimp catching multiplayer mobile game and a keitai strap you customize to reflect your online profile.

The et infopack is a free monthly newsletter in PowerPoint format. You can check out past issues at http://emergingtrendsblog.blogspot.com/ and subscribe to receive the newsletter by email by sending a blank message to etsubscribe [at] worldforumgroup [dot] com

Ever wanted to see the northern lights but couldn’t afford the trip to the Arctic Circle? “Live!Aurora for mobile” is the site for you!

“Live!Aurora” beams the sights of the aurora borealis from Alaska straight to your mobile. Due to the time zone difference, Japanese consumers can enjoy the sites of the aurora between lunchtime and evening. As well as being able to watch streaming video of the aurora, the site also offers video on demand and still images for download.

Last week Infoplant Japan published the results of their latest consumer survey on mobile usage. Here are some highlights:

• However, there was not a great difference between flat rate and standard subscribers when it came to entering competitions (94% vs 93%), or receiving coupons (54% vs 50%)

Soothing, stimulating and suppressing ringtones for muPass from Sammy

I’ve posted about muPass in the past – it’s the technology that allows you to send ringtones from your mobile to compatible everyday devices such as cookers, baby mobiles and alarm clocks

Today, Sammy, the company behind muPass, announced that they will be releasing new muPass ringtones which they developed in collaboration with the Japan Accoustic Lab and the Japan Ringing Tone Laboratory (yes, it actually does exist – I checked!).

From tomorrow, visitors to the muPass mobile site will be able to download “stop the baby crying”, “dolphin therapy” and “wake up feeling great” ringtones, which the company claims are scientifically proven to work. Sammy is planning to release further ringtones in March including “get motivated” and “suppress that anger”. Personally, I look forward to the release of a “calm down it’s only a traffic jam” ringtone I can transfer to my car ;)

In a press release today, Japanese telecoms company KDDI announced that the number of chaku-uta full (full track music) downloads on their au mobile network hit the 100 million mark last week. Proving the adage that you have to give to get back, KDDI revealed that 90% of the tracks were paid for, with the other 10% given away free in promotions etc.

au launched full track music downloads in November 2004 and achieved their millionth download in just one and a half months. Recently, the operator has been strengthening their music offering with more music-focused handsets and an iTunes-esque music download service called Lismo. KDDI revealed that it has seen 170,000 downloads from the Lismo PC music storefront which opened in May 2006.

In the same press release, the company announced that the number of chaku-uta (realtones) that have been downloaded on the network now exceeds 400 million.

In Japan, mobile technology is finding its way into all manner of everyday objects such as vending machines, snowploughs, wristwatches and even your favourite pet’s food dish. As of yesterday you can add smoke alarm to that list.

The smoke alarm in question has been developed by Japanese company Keisoku Giken and adds a mobile cradle to your traditional smoke alarm to provide a mobile emergency alert system. When the detector senses smoke, it not only makes a sound but also dials a pre-registered number to alert the owner of the fire.

According to the company, the system could be used in temples and buildings of historic interest, unmanned warehouses, buildings under construction, restaurants and holiday homes. They also predict demand from families of elderly people living on their own. The alarm is now on sale in Japan for 16,800 yen ($140) but to use it you must purchase a separate handset and subscription.