Can’t find a babysitter? How about a robot controlled by your phone? 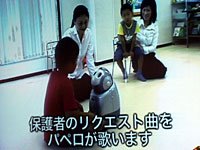 How would you feel about leaving your children in the care of a mobile phone-controlled robot babysitter? It may seem like a vision of the far flung future, but the idea took a step closer to reality this week as NTT have teamed up with NEC to carry out trials of robot childminders in two childcare centres in .

The robot used in the trial is NEC’s PaPeRo which I had the pleasure of meeting at NEC’s stand in this year's 3GSM. PaPeRo has been upgraded with mobile connectivity and can send video images to parents’ mobiles and a blog about their child written by the childcare centre’s staff.

As well as receiving information, parents can give commands to PaPeRo by sending an email from their phone. The command system has natural language recognition to allow parents to move PaPeRo around and parents can even make PaPeRo sing to their child.

At a press conference, Mr Kogawa from NTT said he believed society’s reluctance to acceptance robots as a part of our lives was more of a limitation than technology itself. By placing the robot as an agent and “observer”, the trial’s organisers hope people will look at robots in a different light.

Comments:
Thanks for sharing information.
recharge offers
videocontelecom offers new Customers the proposition will be available on Plan voucher (PV) priced at Rs 76, offering All Local Calls at 25P/min only for 6 months including Rs 63 Talk time; 1050 MB data for 3 month and 100 SMS free/day, with first 2 SMS of the day chargeable at rack rate only in Haryana.