I found a QR code reader that works with my N73! 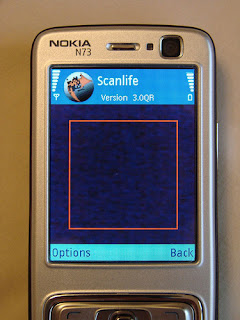 I do quite a few postings on QR codes and really believe that they will be as just as big outside Japan (I’m also writing a report which is nearly complete on how they can be used).

Recently I got my hands on a Nokia N73 and I’ve been trying to install a QR code reader on the handset. Nokia posted their own barcode reader on the N73 section of their website but it wouldn’t install on my handset (and quite a few others’, judging by the support forums) and Nokia took it down pretty quickly. Today I finally found a reader that works!

The first clue was this article on Japanese mobile news site +D mobile. It’s a selection of questions sent in by readers on the recently released 705NK (aka the Japanese N73). One reader asks whether the handset can read QR codes (as many non-Japanese manufacturers seem to miss this quite important function off their lists) and the answer is, predictably, no. However, the article goes on to say that there is a QR code reader available, bizarrely, [on the N73 page of Nokia Taiwan (the English file name gives it away).

The application seems to be built by ScanLIFE, creators of the eZcode. I tried installing it on my UK N73 and it works fine (albeit with the slight hitch that the camera automatically starts when you open the lens cover – so you have to close that before you run the app). However, it's not as good as my current favourite reader (the QuickMark reader on my Nokia 7610).

Comments:
Hi Jan, thanks for this. I also have a Nokia N73 and tried to find a download for this - but have no idea.

Your report sounds really interesting - we are writing a feature on QR codes for The Mobile Search Analyst: would love to quote you on the Koala blog also featured here. OK?
thanks bena

Hello! Our partner company in China also has a great N73 2D reader. This is the only CMCC/Nokia certified reader and can easily be developed to suit pretty much any code format. In addition, we have version for Series 60 phones - though only the micro-focus (N73, etc) support high density codes.

Hey, I downloaded one of the Quickmark clients some time ago on my Nokia N73. I am not sure which one it was, from memory, there was only one S60 3rd phone on their list of supported phones so I tried it and it worked.
Also, I've read somewhere that Kaywa is about to release their client for N73.